Our class trip to Halabja…
A memory to be remembered…
In Security Studies with our professor Caterina Tsoukala we went on a trip to Halabja, in the exact place where thousands died as a result of Saddam’s Chemical weapons. it was over four hours drive to Halabja, as we drove through Koya and Sulaimani. We had an ‘unsteady’ start with the girls arriving almost 45 minutes after the set time, but the rest of the day went better than what we had hoped for. The experience was beyond words- laughter, tears, dancing, singing – we did it all. After lunch in the local restaurant (what else but Kurdish KEBABS!!) we set straight to the Halabja Cemetry, it is still under construction, yet we were all touched as the bus entered the large gates- THE SIGN SAID IT ALL: 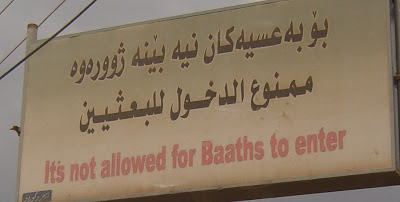 It was tears and emotions of devastation. I learned hearing and reading is one thing, nonetheless, to listen and see is completely another. To watch the sea of graves, each with more that one person, some families of six and seven. Brothers and sisters, relatives, aunts, uncles and cousins…

What caught my attention the most, was at mid-day prayer time. A local elderly man went and prayed by a group of graves… It was not difficult to guess he was a survivor of the catastrophe of March 16, 1988. This is the only place he could come and feel close to the ones he lost. Even for survivors, as we learned, the wound is deep, has not heal and never will…

Two little boys with their note books were sitting near a mass grave… I asked if they knew about the catastophe. I was struck to realize these two youngsters shared deep emotions and beliefs regarding this genocide that has left everyone affected.

This is a very well-known photographic picture that has been transformed into a sculpture. It is an elderly man in his traditional Kurdish clothing, who died tring to protect a baby child held tightly between his arms.

We met the father of one of our students in University. He is one of the survivors living in Halabja. His eye witness account brough many of us to tears. Up to today, it was evident this elderly man is affected in every day of his life by a horrific past. He temporary blindness of his children and running into the basement for protection. He spoke of 136 members of his own relatives dying as a result of the catastrophic event. He expressed of his grief and wounds through tears as he recalled a small section of his never ending story. 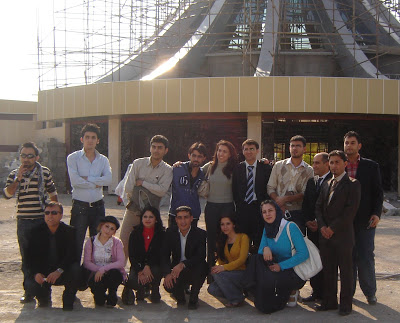 As Halabja is in the process of being rebuilt, 20 years after the deadly commemoration I am hurt to see little is done for the innocent people. Whilst I am not entirely sure of any compensation but the way of life is still devasting to witness. I hope to return one day and see Halabja in better shape. It is a beautiful area, despite all its beauty during the day I spent there, you can not feel anything but gloom and sadness. The atmosphere itself is hard to live. Simply, because on those rocks that you step on, the streets you walking in, the houses you see… children died in pain, families suffered until their last breath. They were victims of an atrocious Baath political party, they were killed simply because they were Kurd. They committed no crime, they did not hurt a single person. What is the guilt of an innocent child, who knows nothing of this world, what is the guilt of a mother who lived for her children or a father who worked hard to bring food home that evening…. these people were victims of a genocide, that up to today we fail to show the world just how devasting the Halabja incident of 1988 really is

On the way back we stopped by a sculpture… the story behind this is very touching. Two young children; brother and sister. Were on the way to school in a winter’s day, they were lost on the way and froze to death… Just another small story with a rich background.
Sazan Madhi Mandalawi
November 15, 2008