I haven’t blogged for so long, it is not because nothing has happened, in fact the opposite is true, a lot has happened and I was just not in the right state of mind to sit and write. But here we are, yesterday President Talabani was announced as Iraq’s President for a second term and just around my house the first meeting was held in Erbil because of President Barzani’s initiative two days prior– all Iraqi leaders and politicians were in Erbil. Below is a picture from my balcony of the cars on the same road of Martyr Saad palace, where the meeting was held.

I realize I have more than one follower (yes!! Mum you’re not alone!) and that gives me enough encouragement to post some of the pictures I have taken in the past months or so and give a brief update about the city that never stops developing.

First of all J.A, a Lebanese friend who was a close follower of my blog from Dubai is now living in Erbil with her partner, I am glad the blog gave a ‘little’ insight to life in Kurdistan for her during when planning to move to Erbil. After her arrival we took a small journey through real Kurdish life and documented parts of our day. 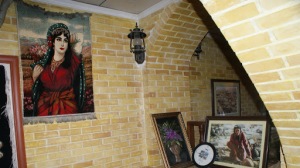 Our day began in Shansheen restaurant around noon. Not the best food in Erbil (specially if you suffer from high cholesterol levels) but certainly a real taste of Kurdish culture, in particular with the seating area on the floor.

The pictures below are of Mala Hamid and his little treasure shop of old Kurdish antiques in Erbil’s Qaysari bazaar, of course for J.A and I it was like discovering a chest of diamonds, except these ones were more special. It is like a small museum of its own. Mala Hamid answered some of our questions and gave us a brief history of his little shop. If you happen to be in Erbil, pay him a visit and don’t hesitate to have a Pyalay Chay (tea) with him and take the effort to look through the small bits and pieces he has in his little corner store. 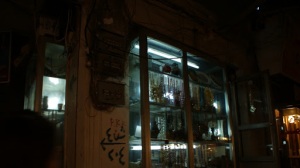 A 60-year-old anklet made by Jews that lived in Kurdistan, in Mala Hamid’s antique shop 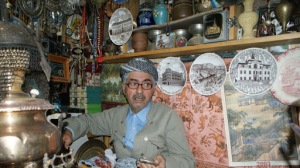 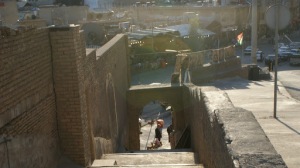 The view from the top of the citadel, I remember going in the same place this time last year (actually have blog pics of it, if you like go into the archive) and it looked nothing like this. They are building the other side as well, this will look spectacular in the near future once completely finished. It already does!

Who said nature is not the best medicine? Hair straightening, skin clearing and even mind relaxation herbs and natural medicine in the Qaysari bazaar.

Sometimes I realize I feel like a stranger driving around Erbil. Once you live here you will realize if you don’t visit a particular area at least twice a week the next time you go there you won’t know it’s the same place. The city is literally a big construction site. I took these pictures just on the way from home to uncle’s place. I do have one fear and that is the quality of the buildings in the long run. With this city everything is unpredictable, you don’t know what crazy idea will hit the mind of any person tomorrow and a new project will begin construction work next week.

I saw this when driving past, they are a new set of shops near Ainkawa that I haven’t had the chance to discover yet, but will give you an update of how it is once I make an effort to visit it 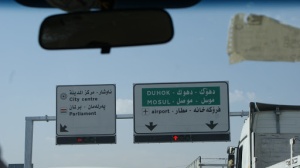 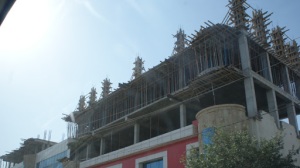 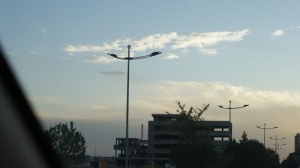 Construction is ongoing on the Gulan Tower

I am aware that in the Bakhtiary area a large piece of land is dedicated now to a women’s swimming pool, sports facilities and beauty center. Not too far away the first and finest movie theatres is being created and the list just continues… what amazes me is the speed at which all this is taking place (and I will admit sometimes a concern emerges from this as well). 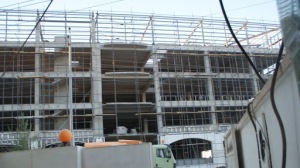 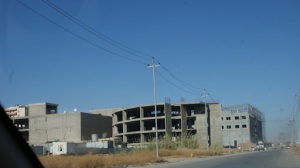 Since the last time I blogged I have discovered a new leisure pursuit. Watching Oprah and cleaning Sawza (greens). Believe me there is an art to separating the greens. I have seen women sit together and talk (gossip!) while cleaning or separating the edible from the ummmm un-edible^? though I have never actually realized what they really do and how they separate them, but believe it or not it’s fun. I tried, and I think from the picture it looks right.

All clear! All clean!

I mean there are three different groups and they all look different – right? The one on the right is the rubbish… is it supposed to be rubbish? 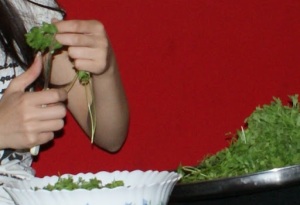 People this is how it’s done*. You know I think you’re just supposed to just take the yellow leaves out and wash it.
While the camera was in the kitchen I thought I would show you something else exclusive to Kurdistan. These are little touches that make this place so wonderful.

Pomegranates in a bowl on the kitchen table. Let me tell you: with a little bit of salt and a nice big spoon watching the speeches of Iraqi leaders could never be more fun and interesting!

This is Naana Teeri, (search for this in a cloth and large plastic bag on the fridge of Kurdish households). Basically it looks like dried bread which is really thin. It is almost magic how sprinkling this with a tiny bit of water makes it softer and fresher than any bread you can imagine. Only Kurdish women can make this the way it should be. Try it the next time you are here!! Trust me!!

I couldn’t skip these two pictures. I am so proud of my new KURIDSTAN handbag, though I am really upset that it is often so difficult to find Kurdish souvenirs around the city, which is also rather surprising. This bag came from Naza Mall and if you think its cute then look at the picture under it. 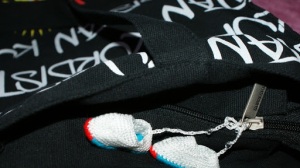 I hadn’t blogged as I was busy at home as well as my commitments outside. But one of the main reasons was this little angel here. The newest edition to the Mandalawi family– Baby Hunar! Who came to visit us for a while.

*Thanks to M.M. for this picture. And yes I did clean all those greens and washed them too – and I must add to that ate them as well.

All other pictures in this blog entry was taken by me.

7 thoughts on “The city that never stops growing!”